Here's the latest on Heidi.

The background texture is a combination of a watercolor texture I painted a while back and a photo of my concrete driveway. I tinted the watercolor a reddish tan to help with the steampunk look, and the driveway layer I left as gray.
Posted by Unknown at 7:35 PM No comments:

Starting this year, SCBWI is taking over sponsorship of the Tomie dePaola Award, although Tomie will still be choosing the winner. I'm not expecting much of a look from Mr. dePaola, but it does give me a subject for my next postcard.

They're looking for an illustration based on the opening paragraphs of the classic Heidi by Johanna Spyri. Tomie claims he wants to see "an image, a style, a vision that I've never seen before!" (exclamation mark included) I'm having my doubts that that's entirely true, but I'm going to enter anyway.

This is the sketch I came up with: 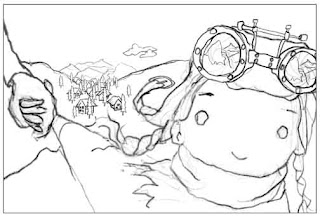 I wanted to add a little bit of my own twist to the illustration by giving her a steampunk attitude. The timeframe would be right-ish, and the goggles were especially helpful for a reflection of the Alps. 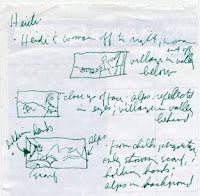 Addendum: As an aside, here are the scrap paper thumbnail ideas I was playing with. I guess technically I went with #2.
Posted by Unknown at 7:08 PM No comments:

If I've ever said anything bad about Steve Jobs, I want to take it back now

So my MacBook belched up a huge hair ball, and decided now would be a good time to never, ever allow itself to go through that whole "Start Up" bull again. After some pleading on my part, it decided to let me sneak in through the Safe start mode, so I backed up anything I could get and could possibly ever use on a computer again.

That's when it realized I was eating it's brains.

It complained my OS reinstall DVD had fingerprints. (It didn't.) Then it ate said OS reinstall DVD and laughed, "Neener, neener." Then it totally deleted the idea that it had ever even contained a hard drive to boot from.

All this in less than 24 hours.

I called our local Apple Store last evening, and the nice young man (Benji) scheduled me for an appointment this morning. And, well, my laptop isn't all that new. O.K. Fine, it's like four years old now. So, so totally out of warranty.

Walked into the Apple store this morning and, after drooling over the iPads, I finally got a sit-down with my own personal Genius Bartender, Mike.

Mike: I don't know if we still have Tiger on our Network. Would you like to upgrade to Leopard?

Mike: (Plugs in magical "Network." Plugs in computer. Ejects DVD--huh?) This should take about five minutes.

Seriously? I sat as still as I possibly could for a few seconds so as not to draw attention to myself and the fact that I hadn't paid them. For anything.

I closed the lid and looked around to see if anyone was watching me leaving with a new operating system on a newly serviced laptop.

Apple employee as I snuck out the door: Have a nice day!

But the no-longer-under-warranty bill. The Tiger-to-Leopard upgrade. Do they know where I live? Are they going to accost me at a later date? When I'm sleeping?

I'm thinking I don't think so. I'm thinking this is what I paid for when I bought the thing in the first place. I'm thinking Steve Jobs must have figured out how to take a flying leap over his old buddy Bill.

Thank you, Mr. Jobs. That's not sarcasm. I really mean it this time. I will recommend your stuff. Apple products for everyone!

P.S. And thanks for giving me iWork (which I paid for the last time) for free in Leopard.
P.P.S. And thanks extra for employing Mike who resuscitated my little digital corner of the world.

Now to reinstall absolutely everything.
Posted by Unknown at 5:18 PM No comments:

One week from today—save the date.

The Western Pennsylvania chapter of the Society of Children's Book Writers and Illustrators will be hosting their annual conference at the Greentree Radisson in Pittsburgh next weekend, and I'll be speaking about social networking.

I have the presentation set up to answer attendee-specific questions including:
I'll also include tips on how to use social media creatively along with listings of online tools and sites to get you started. I've started a new blog that I'll be using throughout the conference (technology permitting) with info and tips from the speakers. I'll also be tweeting images on twitter, with the search hashtag: #WPaSCBWI.

Once I get the presentation finished, I will upload it here:
http://www.nora-thompson.com/wpascbwi.html
Posted by Unknown at 2:30 PM No comments: