I've found myself in a desperate rut, the likes of which you've managed to retrieve me from in the past, and I'm hoping you will be available again sometime soon.

January a year ago, I made a trek to the Museum of Modern Art, specifically to view your work on display there. I bought a membership just so I wouldn't have to stand in line with all the other saps who had to wait to get in.

The rooms that housed your exhibit were terribly crowded; I'm sure we were well beyond the building's fire code. Sardines, as it were. But I managed to see everything, just to make sure I didn't miss anything that might later turn out to be something I would have liked to have seen.

After I squeezed my way through all the rooms I took a breather. I bought some stuff. I ate some stuff and, in spite of the sardine thing, I decided I needed to get myself back in the middle of that exhibit.

This time I knew exactly what I needed to see again, so I jumped out of the line that snaked around the rooms and headed straight for the drawings.

The drawings, as you know, were watercolor outlined in pen, so there was really nothing out of the ordinary there. Using the media in that way was nothing new, and had never been a source of inspiration for me. So that couldn't really have been the attraction.

Why was I still there? Why couldn't I take my eyes off these images? Why were these images so much better than what I conjured in my own sketchbooks?

I think what sucked me back into those rooms and set my sparks flying was that unrestrained childlike imagination. How does an artist allow himself to let everything fly out the window like that? The caricatures were well beyond caricatures. Arms and legs and tails and horns and whatever other body parts that could conceivably be conceived as a body part were attached to shapes that weren't really bodies until simulated body parts had been attached.

But you knew that.

Stripes and checkerboards and spirals and dipping horizons added to my acute sense of instability, and all I could do was stand in front of them and try to soak in as much as my little brain could soak in, in the hopes that some day that freedom would spew out in my own work.

On the train ride home I drew. Over the next few months I drew some more. I was inspired and ready to take on my own sketchbook demons and wrestle them into something I could proudly show the world.

Things seep away over time, however. It's been another year, and I seem to have lost that thing. That permission you had given me to create outrageousnous. Those weird images that had been crisscrossing around in my head. And, ultimately, the hope that somewhere down the line it would all be worth it.

Dear Tim (do you mind if I call you Tim?), please send me a sign. Something. Anything. Something to get me back on track. Something to help me find my monsters. I'm afraid right now they're lost, and I'm also afraid they're scared. And hungry. I know I am. I desperately need to bring them home.

Please help me bring them back home.

P.S. Thank you kindly for allowing my family to give me your art book last Christmas, and I'm eagerly awaiting your and Danny's CD box set, as my Alice in Wonderland soundtrack is quite possibly wearing thin.
Posted by Unknown at 4:30 PM 2 comments: 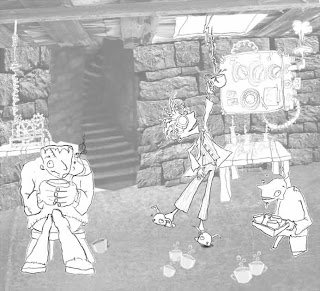 I'll be participating in the Pittsburgh Society of Illustrator's mixed drink directory later this year, and I wanted to mash Frankenstein up with a little steampunk. My recipe will be for hot cocoa, and this is the sketch I came up with. Thanks once again to Harpers Ferry, WV, and their great collection of stone buildings and textures that have yet to let me down.
Posted by Unknown at 8:31 PM No comments:

This is going to take a while, so I apologize right up front, and I thank you for seeing it through to the end, if you do. Let's start by stating the instigation for this post:

Shaun Tan is changing my career.

There. I said it, now it's out there, and now I have to find the nerve to follow it through.

This all started the day I bought Shaun Tan's book Tales from Outer Suburbia last year, mostly for the illustrations (as usual), but also because I'd been working on a book of short stories of my own, and I wanted to see how somebody else tackled that kind of project.

Having Suburbia and a library borrow of his The Arrival as my only Shaun Tan interactions, I dragged family to see the Oscar-Nominated Animation Shorts at a local movie theater last month. The Lost Thing was one of the nominees (and eventual Oscar winner) and was based on Shaun's Australian-released children's* book of the same name. Shaun also worked for years on the movie.

*The word "children's" is a little dodgy here. The book will be forced into the children's section of bookstores because, cleary, no adult would be caught with a book filled with *gasp* pictures.

I bought the 15-minute short from iTunes within the week (sorry, no direct URL to the movie on iTunes). I pre-ordered his book Lost and Found which was released a few days later and included three of his early picture books, one of which was The Lost Thing.

My own Lost Thing.

I checked my checklist:
I've heard a lot of advice through the years about what editors and art directors are looking for in an illustrator. I'm a member of SCBWI, and I attend the local conferences. Before I go on, I just want to say that I know these are only opinions and guidelines, and if my work is good, it's just a matter of finding the right editor/art director/project that will take me on, regardless of whether the work followed the advice given. I know that. I understand that. But when the work isn't coming in and the same advice is (again and again), it may be time to think about making some changes. 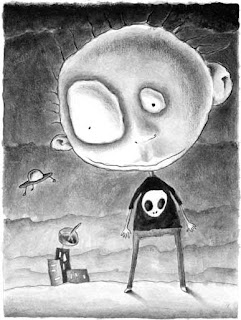 This is Stanley. He is the image I used on the first postcard I sent out with the style I could finally call mine. My initial portfolio and book submissions were similar.

I was told by two editors that they were concerned my characters weren't cute enough.

I was told by a fellow illustrator that I needed to think along the lines of three-year-olds and clowns. "And smiles," he said. "Not creepy."

I was told by an art director that she could only use my work for scary stories.

I was told by another art director that he couldn't use my work, but to send him updates anyway because "you never know." (That publishing company released a book of poetry less than two years later using an illustrator who's work was very similar to mine, but who's pedigree included working for Disney.)

At a conference in NYC during an open question session with a couple of art directors, one answered the question, "What are you looking for in a submission?" with:

Our portfolios had been open for preview earlier in the day. You can't make this stuff up.

I made the changes. I concentrated on cuter. My heads got smaller, along with my eyes, which also evened themselves out and eventually constricted to pupils. I drew clowns. I made new samples and avoided the scary. My people were smiling. I kept up with the promotions. I sent new samples every three months. I tried to keep my attitude positive.

Why was I not getting the work?

I posed the question to an editor. "I love it!" she said. "But this would be a hard sell."

I posed the question to an agent. "It's the economy," he said. "Just keep doing what you're doing."

I posed the question to an art director that same day. "It's the economy," she repeated. "You're doing everything right."

I rewrote some of my "adult" short stories to make them more "accessible" to a younger audience, based on things I had read and heard at conferences: 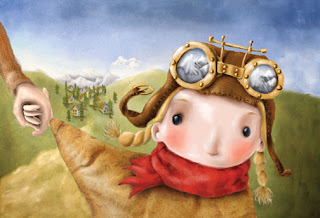 But more than anything I took the edge off my illustrations.

I know. There's that other piece of advice that gets thrown around a lot. But what if beautiful images and writing from the heart stomps all over the other rules?

The Lost Thing actually shows men smoking! Not once, but three times! Smoking! The horror!

The first of the three stories is resolved by a tree, and the third story isn't really resolved at all. But the kids! Aren't the kids supposed to be who make everything alright?

All three stories in the Lost and Found collection have themes that would surely be considered adult-oriented. Right? Maybe older kids, but certainly not those three-year-old clown lovers. (How many kids would really understand the sign, "State-sponsored thought for the day: LET THE MARKET DECIDE"?)

That's when I took a look back over the last few years to see what happened. When did I change? When did I stop illustrating for me?

I took a(nother) long, deep breath and asked, "Where did I go?"

I had lost my Me somewhere.

My funny. My style. My twisted sense of humor. The Me that made my illustrations mine. My ideas had been squashed by 32 pages of cute. Of action. Of advice. Of opinions.


"Think about the things in yourself that are different to everybody else. And don’t think of those as a disability or something negative, but think of it as a positive attribute. Whatever it is that makes you unique, that’s what people are interested in."

Really? I so need this to be true.

I want to make a beautiful book that happens to be loaded with illustrations. A book with pictures. Why are picture books only geared toward kids? I buy kid's books all the time. For me. I buy them for the pictures. My collection of picture books are alphabetized by illustrator.

So I guess at this point I'm on my own.

I'm going to revisit some old picture books I had given up on. They had been poked and prodded and reinvented to the point I didn't recognize them anymore. My original vision had been lost in my attempt to make them conform.

I'm going to continue with my Hairy Eyeballs project, but I'm not going to hold my breath for a publisher. I've submitted the book to an editor I met at a conference who definitely seems the type who would go for this sort of twisted idea of a thing, but I'll completely understand when she tells me she isn't interested. After the book is rejected in a few months, it will be my baby again, and I've no plans on submitting it elsewhere. I know people who will help me with the editing. I've already designed the book. I have a following of close to 3,800 people on Facebook as of this writing who think my twisted little characters really are cute (their word, not mine). But more than anything, I don't feel the need to be accepted by the mainstream publishing world anymore.

So it's very likely at this point I'm the only one still here. But that doesn't really matter right now, because this post was just for me.

And now, thanks to a lost thing, my creativity is again, too.
Posted by Unknown at 3:30 PM 3 comments: