In response to VistaPrint (and now 99designs)

Where do I start?

I guess I could start by saying this blog post has been sitting around as a draft since Feb. 6, 2012. I started it, took a few deep breaths and slowly lost the fight in my belly that got me started on it in the first place.

So lets begin there.

I'm sure most everyone has seen the commercials for VistaPrint (I refuse to link to the company here). Who wouldn't want to bypass the time and effort—and let's not forget money—it takes to hire one of those elitist graphic designers when you can so easily create your own designs right from the comfort of your own computer (and in your jammies).

For cheap. Let's not forget that part.

You can make your designs look the way you want. You can pick the colors and fonts and logos yourself. And hopefully you're pretty good at proofreading, because who wants to pay for 1,000 brochures with embarrassing typos? Because, really, what difference does it make which colors you pick, as long as you like them, right? And as long as the font looks cool, your business will look cool. Anybody can throw a logo together. Geesh. All it takes is one of those fonts that you like, a color that says, "POW" and one of those free stock pieces of clip art. You know, the same clip art all those other people who are using the service can choose from.

You'll be good to go in no time.

I had a client who I've worked with for years ask me to design a sign for their business, which I have done numerous times in the past and have always received an enthusiastic "thank you" for how great I made their business look. I waited for their email reply with size specs, but was punched in the gut when the email instead said, "I decided to use VistaPrint."

They decided to use VistaPrint.

They were able to create the design themselves online. Not that they had any experience in how that would work. You pay with peanuts, you get monkeys.

Let's knock some things out of the way up front:
Let's take a step off to the side here for a second...

When someone asks to get work done for free and they get it, they'll probably expect that work to get done for free again in the future, right? And if you won't do it for free, surely someone else would love the opportunity. And if enough designers (or artists in general) do the work for free, then why would anybody want to actually pay for that work? And what if someone actually decided, yes, they would pay you for your work with, say, exposure, then you could get paid for some other job at a later date? So if you actually did get that paying job after working on that first job for free, in the end you've done two jobs for the price of one. That would be worth the money you spent on all those programs and schooling, wouldn't it?

Which brings me to today.

I saw a commercial on TV for 99designs.com (again, I'm not linking). They're a crowdsourcing site where, if you want a design done, you post a contest where you get to pick a winning design from all the free work that gets entered into your contest. Sure, that winning entry gets paid, but those other entries? Yeah, those guys just spent hours (maybe days) of their time and will get no money for it. None. But they'll have a great design for their portfolio.

Let's put this in perspective. I want a deck built on my house. I decided to have a contest where contractors can each build me a deck to look at. Not just an idea of a deck, they have to build the actual deck. All those decks will be gathered in one place, and then I get to pick which one I'd like to use and pay for. Those other decks, and all the overhead that went into building them? Yeah. Those contractors can use those in their portfolios. Oh, and by the way, I'll be paying for the deck by inviting my friends over and telling them who it was that built me the deck. I don't have many parties, and I don't have many friends, but what a great opportunity for exposure you'll be getting, huh.

Is any of this making sense?

Has anybody read this far?

Is there anything that can possibly be done?

Probably not. Maybe. I don't know, it might be too late.

If you're a client, pay for the work from a real designer. My husband knows enough about plumbing that he knows somebody else should be doing ours.

If you're a designer (or artist), don't work on spec or enter contests. Period. That not only devalues your work but all the work of the designers that have come before you and all the future designers who will be following your ass out of school. Do you really want them getting the job instead of you because they'll do it for free?

If you want to read more (after this, I'm not sure why anybody would), try:
http://www.no-spec.com/faq/
http://www.specwatch.info/why.html
http://twitter.com/specwatch

Also, you may have already seen my post on yet another problem with working on spec (could there really be more?) in a post from February which I'll link to here.

I'm going to go ahead and post this one before I take too many deep breaths.
Posted by Unknown at 2:17 PM No comments: 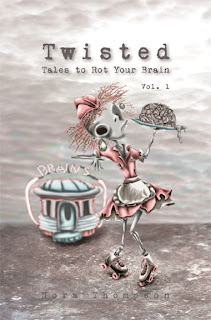 I just found out yesterday that my book Twisted: Tales to Rot Your Brain Vol. 1 has taken first place in the category of "Fiction: Collection of Short Stories" in the 2012 Purple Dragonfly Book Awards! The interior design layout also won a second place award.

They don't have the winners listed yet on their site, so I can't post a link, but once they're listed, I'll post.
Posted by Unknown at 10:50 AM No comments: