In May I finished an illustration for a drink mix directory that was published by the Pittsburgh Society of Illustrators in August. I called it Dancing in the Moonlight, and I had that old King Harvest song in my head the entire time.

(As an aside, just try and listen to that song and then get it out of your head. Not gonna happen. I had to download it.)

The illustration was part of the exhibit that PSI put together at Gallerie Chiz in Shadyside, and it will be in another exhibit starting in November at the Art Institute of Pittsburgh. 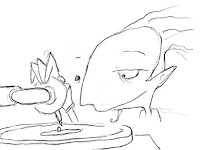 But I had an idea.

Next month I'm attending the Tri-Regional SCBWI conference in Gettysburg. They're going to do something called "First Looks" where illustrators send in three related images to possibly be included as part of a panel discussion. The images will be projected for everyone at the conference to see (no pressure there), and the panel (editors, agents and an art director) will offer their first responses to the images.

I really didn't have anything finished that I thought would be good enough, so I decided to create two new images to go with Dancing in the Moonlight. The images I've posted here are the sketches for those two images.

And now if you'll excuse me, I have some painting to do.
Posted by Unknown at 1:37 PM