The next page in my Sketchbook Project sketchbook is inside the front cover and the title page (you didn't think I wouldn't have a title page, did you?). And here's the post with the cover image (and an explanation about the Sketchbook Project, if you don't already know what it's about).
Posted by Unknown at 4:18 PM 2 comments:

Next year (next month!) I'll be participating in the wildly successful Sketchbook Project, put together by the Art House Co-op and the Brooklyn Art Library. I know, I know, I sure waited a long time to jump on the wagon, but at least I'm not falling off of it. I posted my first sketch in an earlier post. 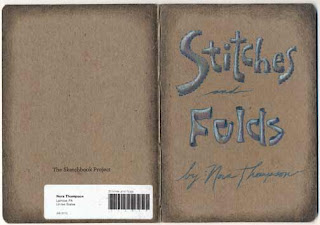 We had to pick "themes" for the sketchbooks, and the one I picked was Stitches and Folds. I thought I could do something cool with that idea. My first page from the sketchbook is actually the cover, and here it is (ta-da):

Each image will include some sort of stitch or fold (in the drawing of it, not an actual stitch or fold, which I played around with and discovered didn't work so well) opposite a page with a song lyric that I think goes well with the image.

I rebound (rebinded?) my sketchbook (you're allowed as long as you follow their rules) with some toothier paper (theirs was too smooth and too white), so the stitching on the spine is mine (and part of my theme).

What was I thinking?
Posted by Unknown at 2:31 PM No comments:

A few weeks ago I finally made my way to Gettysburg, Pennsylvania. I wasn't there to visit the place, although we have plans of returning next year for actual Gettysburg reasons. So much history. I feel so attracted to something there.

But this post isn't supposed to be about Gettysburg.

I hauled my butt across half the state for an SCBWI conference, and yeah, I came home with lots of thoughts to think loudly about. But I'll attempt to narrow those thoughts down to just one: Jordan Brown.

I had a manuscript critique with Jordan, a Senior Editor at Walden Pond Press and Balzer + Bray, imprints of HarperCollins Children's Books. The story I had written was a short story I had finished for a fiction writing class I took about eight years ago (has it been that long?). My professor at the time loved it, and in his comments at the end wrote, "Get it published."

The story wasn't long enough. I knew it wouldn't make a complete book. But, being an illustrator—and pictures are easier for me than words—I had the brilliant idea (I thought, at the time) to pad the short story with pictures to make it long enough. Maybe even convert it into a graphic novel (Mr. Punch-style). Yeah. A graphic novel. Then the words would be at a minimum, and I could tell a lot of the story just using images.

He was thinking more along the lines of, say, a novel.

"You mean those things with all the words?"

"Those things with all the words."

But there was something in the story he had latched onto. Something he didn't want me to lose as I was writing more. Something he likened to...

Shaun Tan? Really? How could he know?

What he liked about what I had written was all the stuff I hadn't written. How you didn't know when or where the story was taking place. Was it in the past? Or the future? Or was it even on this planet?

He totally got it.

He said it seemed like I was working in the sort of space that Shaun Tan occupies (not bad company to be in), but a very difficult one to break into (not what I wanted to hear).

It wasn't until I read this article in the Guardian today (and written by Neil Gaiman, no less) that I realized how right Jordan was. The paring things down. The fictional landscape. The far future, the distant past.

I had decided before I left the conference to take Jordan's advice and write the whole thing as a novel. He even suggested I take a look at A Monster Calls by Patrick Ness, not just for the loss of the protagonist's mother, but also (as I figured out when I got the book) for the illustrations. They're beautiful. I thought, yeah, writing all those words is going to take a while, but I can supplement all those words with some really cool pictures.

But as soon as I finished the book that little doubt devil started spewing into my brain again, and I started growing doubt shoots. Doubts about all those words. A Monster Calls was good. It was really, really good. And heavy (in a deep sense, not in a weight one). Can I really write something as relevant as that? Why am I doubting my writing? Why am I dragging my feet with this story?

What am I afraid of?

I won't be able to start writing for a few days anyway, so in the small spurts of time I have until then, I've decided to absorb a little Shaun Tan. The Rabbits. Tales from Outer Suburbia. The Lost Thing. I'm hoping in the time we spend together Shaun will help me find the confidence I'm thinking must be lurking around here somewhere.

And then after that, if I've been good, I can get back to the pictures.
Posted by Unknown at 6:32 PM No comments: