My illustrations are heading to Italy! #BolognaBookFair

At the end of January I submitted a page of my illustrations for possible inclusion in the SCBWI portfolio at the Bologna Book Fair, and this would be the page I submitted.

The portfolio selection team notified me that my page was chosen to be included (yay!). Not only will it be in a physical portfolio at the book fair, but it will also be included on their site. Once my image becomes available (along with the rest of the portfolio), they will send me a link to it which I'll post here.

Here was how they described what they're doing:

"A portfolio of SCBWI illustrator members work will be on display at the SCBWI Showcase during the 2012 Bologna Book Fair and available for browsing by publishers, agents and other attendees from across the world. In addition, a digital version of the portfolio will be posted on this webpage with thumbnails of artwork and contact information as we did for our 2010 Illustrators' Gallery." 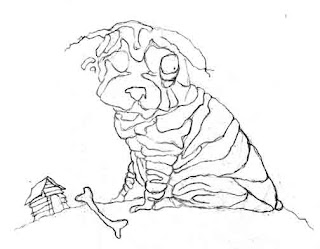 Here's another sketch from my Sketchbook Project project. It's a sketch of a really wrinkly dog with lots and lots of folds, but absolutely no stitches. That I know of.
Posted by Unknown at 3:04 PM No comments:

The argument against working on spec (or, Why it feels like my idea was stolen) #nospec

Way back on April 6, 2007, I received an email from a publisher that I won't mention the name of here. I thought I finally got a bite after all those postcards I had been sending out. Here was what she wrote:


"Thank you for your interest in working with [us].

We have several projects that we feel match your talent and are interested in knowing if you are still available to illustrate picture books.

[Our] process is simply (sic). We ask that you create a rough cover and one inside spread from the text we provide. From your work we will select an illustrator based on who we feel has the best conveyance of text through art and understanding of appeal in the children's genre."

I ran the proposal past some of my colleagues in the Pittsburgh Society of Illustrators, and I got advice that went both ways. I reasoned that even if I didn't get picked I could still finish the image and use it for my own self-promotion (yet another postcard). 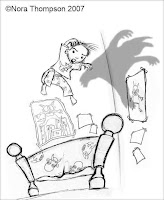 So I did. Here's the sketch I did for the cover.

This was the exact file I sent in (on April 18), with my name and copyright really noticeable right there at the top. 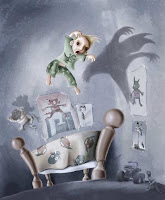 And this was how the image looked after I finished it. To be fair, I didn't actually email the publisher the final image, so the argument could be made that they never saw it.

The editor/publisher replied that if I didn't hear from her by that Friday, then she would get back to me when she got back from the Bologna Book Fair. When I hadn't heard anything by May 11, I sent an email to find out what was going on, and she said she was "still digging out from business travels, but promise to get back to you."

O.K. I guess I needed a little patience.

On September 17 I sent another email asking for the status of my submission, and that's when I found out they weren't interested in my idea. 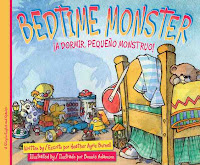 This evening I was doing some updating of my mailing list, and I was checking out that publisher's site to see if I should keep sending to them (no, I hadn't removed them from my list yet) when I found this.

Yes, stylistically my image and the one here are very different. But nowhere in the manuscript was there any mention of the boy casting the shadow of a monster in his bedroom. Is that so obvious of an idea that somebody else actually thought of it after I did? And if this illustrator and I both sent in the same idea, wouldn't you as an editor/publisher want to go in a direction that wasn't so obvious?

As an aside, when I first found out that they didn't want me to illustrate the book, I kept watching for the book on their site to see what they had picked instead. In the beginning, there was another image on the cover that I can't seem to find on the Internet. It was a computer-generated image of a purple monster standing at the foot of a bed. The monster was in the middle of the frame, looking directly at the viewer as if the viewer was in the bed. The image above isn't the original image I saw online.

I know the illustration on the final book cover isn't taken verbatim from my idea (especially having seen what other companies have tried to get away with in swiping artwork for their designs), but knowing that the editor saw my rough and seeing the similarities in the final cover image, my post Bedtime Monster anti-spec policy has been firmly cemented.

The @arthouse Coop have (has?) digitized my #sketchbookproject

Part of the payback for creating a sketchbook for the Art House Coop (The Brooklyn Art Library) is that they scan every page of your sketchbook and upload them for the whole world to see. They've finished scanning all of my pages, and here's the link to the digitized version:

If you're unfamiliar with the Sketchbook Project, here's a post that attempts to explain what it's all about:

And here's a ready-made search of all my posts of sketches and finished pages for the project:

Here's the finished Frankenstein page of my Sketchbook Project. This is the center spread, so what you're seeing down the middle is the tied-off end of the string from where I bound the book.

The only reason I can think of that my Frankensteins are green is because Herman had a bit of a greenish tint to him when The Munsters were in color. I used to be a big Munsters fan when I was little.
Posted by Unknown at 3:00 PM No comments: 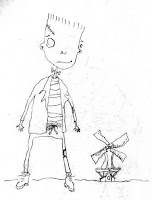 Here's the next page in my Sketchbook Project for the Art House Co-op and the Brooklyn Art Library. This illustration marks the center spread which means he's also standing on the halfway-through-the-sketchbook page.

If you missed what this little project is all about, here's the post that explains all the details.
Posted by Unknown at 2:59 PM No comments:

And here's that little baseball player dude in color (for the Sketchbook Project 2012 sketchbook). He's wearing red and white, of course, because those were my high school's colors.
Posted by Unknown at 2:58 PM No comments: 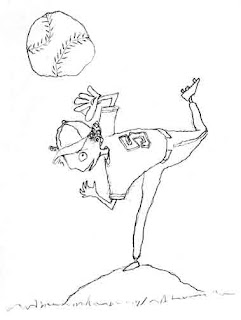 Here's my next sketch in my Sketchbook Project sketchbook. He's a baseball player (duh). I wasn't sure at first if I should put a name on his back or not. I've sort of decided he plays for a high school team, so I'm going to leave the name off.
Posted by Unknown at 2:57 PM 1 comment: