The last thing I saw before I went to bed Saturday night was the very end of Alice in Wonderland. I found it on ABC Family just as the White Queen and Hatter were standing outside the queen's castle waiting and hoping Alice would show up to battle the Jabberwocky.

That last paragraph doesn't really matter much except that, when Alice first gets a look at the Jabberwocky, she tells Hatter that sometimes she "believes as many as six impossible things before breakfast." So I'm sitting here before breakfast thinking of the things that, until yesterday, I would have thought were impossible, and I'd like to share five of them (I'm lazy, it's early, and I'm pushing it to find five).

Growing up a reluctant reader makes this one all the more impossible. I guess now I've become what might be considered a "reluctant writer."

I did write the Twisted book so I would have something to illustrate, but in the end there were words involved and I did write them. That, and they were bound in a book.

3. I would be reviewed in Publishers Weekly

I'd like to think that only happens to real writers.

4. Writers would accept me as one of their own

I spent the weekend at a writer's retreat trying to convince everyone there that I was actually just an illustrator, not a writer, and that I didn't really like to write. They convinced me otherwise.

5. Editors wouldn't laugh and point when I read them my manuscript

At that writer's retreat over the weekend? Yeah. I got to read to two different editors from Scholastic; Grace Kendall and Mallory Kass. I personally witnessed them laughing over the weekend, and they both seemed to have complete control over their index fingers, and neither of those things were directed at me as far as I could tell.

And I believed all of these impossible things before breakfast.

Publishers Weekly, the book industry's leading news magazine since 1872, has taken time out of their busy schedule to review my book, Twisted: Tales to Rot Your Brain Vol. 1! Just getting a review from them is outstanding, but it gets better: They actually liked it!

Here's a little bit of what they had to say:


"In stories that last only a few pages and comics that resemble Nickelodeon cartoons on acid, Thompson riffs on zombie, werewolf, and other ghoulish genres, while also finding the horrific in unexpected places...Just the thing for readers who aren't scared of the dark--or for those who are and like it."

You can grab your own copy at Amazon by following the link above. It's available in hardcover, paperback and completely digitized for your Kindle. And then maybe you can write a little review of your own?
Posted by Unknown at 2:05 PM No comments:

Here's the final sketch from my Sketchbook Project sketchbook. I think I'd like to paint him biggie-size some day. Maybe add a crow somewhere and a corn field all around him. And a yellow brick road around front. Scarecrows can't exist without yellow brick roads, can they?
Posted by Unknown at 1:55 PM No comments:

Last December I had had about enough.

When I built my first Web site, it was 2001 and getting up and running on the Internet wasn't the easiest thing to do. I chose GoDaddy to host because, at the time, they were the easiest thing I could find. For some reason I thought their name and logo meant they would be pretty cool to work with. I'm such a sucker.

Since the beginning, I've done my best to make sense of their site. It's hard to figure out what you're doing on it. It's just way too hard to navigate. Not only that, at every turn they try to get you to buy more of their products. When you buy a new domain name, when you re-up your hosting, or just when you bring up the site, everywhere you turn they're pushing more product. Once, when I called their support number, what I really got was a sales person who spent most of our time on the phone getting me to renew my hosting plan.

Still, I learned to ignore it all and stayed with the company.

For most of the past 10 years, I have endured GoDaddy's unfemale-friendly commercials during every Super Bowl. I put up with the same attitude on their site where they tease you to "see the rest" of what they couldn't show on T.V. And I did it knowing my money was paying for it, and I stuck with them anyway.

Last spring I put up with GoDaddy's CEO, Bob Parsons, hunting elephants and then posting the graphic videos of it.

And still I stayed.

Until last December. That's when I heard about GoDaddy's support of SOPA. That's when I decided it was time to jump ship. Turns out a lot of people felt the same way.

Up until last December I was a little frightened of moving away. I had been there for 10 years, my sites worked, my email worked and I was afraid I wouldn't be able to figure out another company's technology.

I did a little research, and I found a local company based right in Pittsburgh that was started just for me. Their name is pair Networks, and they had me at "we have an environmental policy." It took a little trial and error, but all my sites were up and running smoothly within a couple of days, all my emails are in working order, and I haven't noticed any down time since I started hosting with them.

Now I know my money is going somewhere I can be proud to say I support. I don't have to pay for scantily clad women during my Super Bowls anymore.
Posted by Unknown at 4:19 PM No comments:

Well, we all survived the book signing at the Frick Art & Historical Center over the weekend, and I'm terribly happy with the nice turnout! I thought I would be quite embarrassed by the lack of people in my line, but it turns out people are more willing to admit to liking the twisted stuff than I had originally thought. So, no, no embarrassment on my end at all. 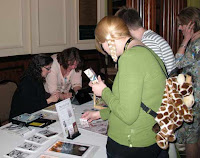 I signed lots of books, and we even got to use the new Square credit card reader which, by the way, a three-year-old could figure out. The image is of our first swiper signing for her purchase. The best part was how much fun the people giving me their cards to swipe thought the card reader was. It wasn't just me.

I brought a lot for people to choose from including copies of Twisted: Tales to Rot Your Brain Vol. 1 (both hardcover and paperback), copies of Yikes! Wow! Yuck! Fun Experiments for Your First Science Fair, and prints, posters, postcards and bookmarks with images from Twisted. We needed the entire table to fit everything.

I have to do a little research about getting into other venues for book signings, but I think this one was a very successful first try. Thanks to everybody for your support!
Posted by Unknown at 10:51 AM No comments:

For my book signing this weekend, I bought myself a new iPad so I could accept credit cards. Yay!

Exciting and scary, but yay!

The app and hardware is from a company called Square. The app is called "Square Register" and works like a little register on your iPad. I can upload inventory—including images—and prices, and then all I have to do is click the product and the app starts a tally. So far it's been really easy, although I've only been playing. The real test will come this Saturday when I have to use it in real time. 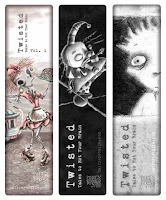 I'll be selling hardcover and paperback copies of my book Twisted: Tales to Rot Your Brain Vol. 1 along with prints, posters and bookmarks at the Frick Art & Historical Center in Pittsburgh. You'll also get a free bookmark with every book you buy, or if you like, you can just buy a bookmark. Your call.

I'm hoping to see an absolutely huge turnout. I totally want to run out of books and stuff. No pressure or anything.
Posted by Unknown at 7:57 PM No comments:

Women of the Page panel @ The Frick

I made it through the Women of the Page panel at the Frick Art & Historical Center without tripping, burping or falling off my chair. Great news!

It was a fun night and I got to see the Draw Me a Story exhibit, too. Well, sort of. I wasn't wearing my glasses, so I didn't really get to read all the information that was included with each illustration, but I got a general idea of what the illustrations looked like. That should be something.

My favorite illustration was the one by WPA artist George Avison called, "Bucking Bronco." It was the cover for the book Sunflight, and the original painting was matted and framed leaving all the handwritten notes and instructions visible. The book itself was displayed in a case alongside the original.

I also want to see (with my glasses) the sketch Maurice Sendak did of Max from Where the Wild Things Are. It was so small. I really need to wear my glasses next time. 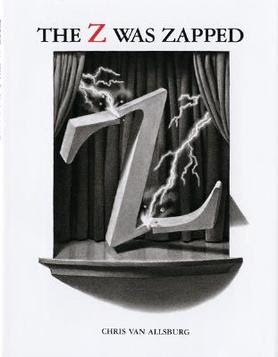 The Chris Van Allsburg one is another one that is probably going to be incredible when I finally see it. All those details. This illustration was for the book The Z Was Zapped. I've never seen the book, but it sounds a bit like The Gashlycrumb Tinies in that it's an alphabet book and each letter meets an untimely demise. And, as a type geek, I love the inside joke: The book follows the "Caslon Players," Caslon being the font the book was set in. 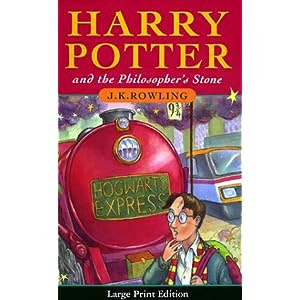 As an aside, I feel terrible for Thomas Taylor. He did the original illustrations for the first Harry Potter book, but was dropped for someone more established after the book became a hit. He was only out of college for two years, and Harry Potter and the Philosopher's Stone was his first commission. Poor kid. You gotta feel for him.
Posted by Unknown at 12:41 PM No comments:

I've got one! (My first book signing)

So on my way out the door after that panel discussion at the Frick Art & Historical Center (that I told you about here), Susan Bails, another one of the nice Assistant Curators of Education there, stopped me and asked if I was going to be busy April 14. It's a Saturday. 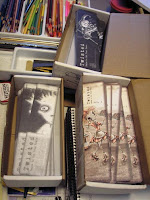 What: A book signing. I'll bring hardcover and paperbacks of Twisted: Tales to Rot Your Brain Vol. 1, some prints and posters of illustrations from the book (I still have to check to make sure I'll be allowed to sell items that aren't books, but I'm going to try), and I'll even give you a free bookmark with every book you buy.
Where: The Frick Art & Historical Center, in the museum rotunda (it's a beautiful building, by the way)
When: Saturday, April 14 from 1:30-2:30

Stop in and say, "Hi!" Please! I'm hoping some people will stand in a line in front of me, not just Stacy.
Posted by Unknown at 1:43 PM No comments: