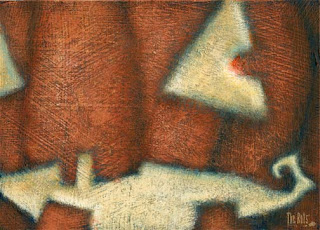 So I've spent the last week and a half fighting a cold. Didn't feel like doing much of anything. I pretty much sat around and coughed up a lung.

But when I started feeling the least bit better, I really, really felt like digging into a painting. I had a couple of birch plywood boards that were already cleaned and gessoed, so I grabbed the smaller one of the two and pulled out some Halloweeny-colored paints.

I wasn't sure when I started what I wanted to do. I had painted a quick sketch of a field of pumpkins and quickly realized I wasn't going to get the painting finished by the end of the afternoon, so I scrapped the idea. But looking at the sketch gave me another idea.

On the upper right I had sketched a moon, and arching across near the bottom was the horizon line. I started throwing on some blueish colors thinking I could paint some kind of night scene, maybe throw in a few tombstones. But as I waited for the paint to dry, I started seeing something completely different. The moon became an eye, and the horizon line formed the top of a mouth.

So here he is: a 5"x7" jack-o-lantern painting finished in one afternoon between nose blowings. I think if I can get a few more of these puppies in the can, they'd make nice greeting cards. It's that "a few more in the can" thing that seems to be holding me back. I'll have to work on that.
Posted by Unknown at 4:10 PM No comments:

Email ThisBlogThis!Share to TwitterShare to FacebookShare to Pinterest
Labels: acrylic, board, jack-o-lantern, pumpkin 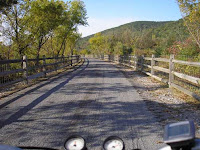 A couple of weeks ago we trekked up to Wellsboro, Pennsylvania, to spend some time on their rails to trails, but we weren't ready for everything we saw while we were there.

On our first day on the bike trail while we were riding along we saw a large animal on the trail ahead of us. When I exclaimed, "It's a cat!" it looked up and saw us and headed off into the woods. It was a cat alright. A bobcat. Bobcats don't like to show themselves often, so that was a real treat. It didn't stick around long enough for either of us to get a photo, but here's a shot of what one might look like up close and personal.

Also on the trail that day were several snakes. The first one we saw we stopped to help him off the trail. Where we normally ride we don't see too many snakes on the trail itself, and we'd rather they not get themselves run over. But then we saw another one. And another. And another. It was like they were everywhere. Mostly they were non-poisonous water snakes, but we did see a couple of garter snakes, too. This was one of the water stakes, and he let me take his picture. Well, sort of. I don't think he was very happy about it.

The second day we were there was a bit rainy, so we walked the town and read the day away. During our walk, I snapped this photo of a deer making itself at home in somebody's yard. It didn't seem very surprised at all to see us and wasn't frightened by us being there in the least.

The third day turned out to be spectactular, so we hit the bike trail again. As we rode past some houses, along the top of the fence separating the trail from the yard ran a black squirrel. He ran right along with our riding speed and was about three feet away from me. At first I didn't recognize what it was because I didn't realize that black squirrels even existed. But they do, and we got to see one close up. Unfortunately, by the time I realized what it was, it was too late to pull out the camera.

Did you see the first photo at the top of this post? Shortly after I took it (and put my camera away, of course. This is starting to sound like I'm making this up, isn't it.), we caught sight of a large black animal on the trail ahead of us. At first I thought it was a really big dog, but then it stood on its hind legs and proceeded to climb over the fence on the right of the photo. Yep. A bear. 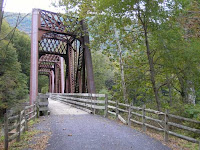 We saw so many more snakes on the trail that we just decided to do our best not to hit them with our bikes. Snakes themselves are pretty exciting to see on a normal bike trip, but after you've seen a bobcat and a bear, any snakes you might see seem kind of tame.
Posted by Unknown at 2:43 PM No comments: