No, actually I wanted to love you. But it was me. I just couldn't do it.

When Hunger Games first came out, I was reluctant to hand over my money for a book that I thought was about kids killing each other in a futuristic reality TV show. People kept telling me, "No. It's not like that." Eventually I caved and bought the paperback at a Scholastic book fair for something like 50% off.

I put off reading it until after I had already read the other book I bought at the book fair (a hardcover copy of Dead End in Norvelt by Jack Gantos). Then, I read the first chapter and put it down. I wasn't too interested. Then, I read the first chapter again because it had been too long and I didn't really remember what had happened. But this time, I made myself keep reading.

Somewhere around the middle of the book, I realized for myself that, "No. It's not like that." Yes, there was that kids killing each other in a futuristic reality TV show thing, but it was more than that. And I was getting it, and I was starting to look forward to reading the next one.

By the time I finally got to Catching Fire, the second book in the series, the Hunger Games movie had been released, and the second book wasn't available from my local library. I put my name on the waiting list, but found it hard to wait. When Barnes & Noble sent me a coupon for a bunch off, I put it toward my very own copy of the hardcover boxed set of the series.

So yes, I'm now the owner of both a paperback and hardcover copy of Hunger Games, but I was totally fine with that. I figured I'd donate the paperback copy to some worthy something or other someday.

Finished Catching Fire and was still O.K. with the series. I didn't think it was as good as the first book, but it was certainly a page-turner, which isn't bad.

But then a few days ago happened.

I finally finished Mockingjay and was terribly disappointed. I guess in my idealistic world I was hoping the problem that needed to be solved in the book would happen in a genius kind of way. In a way that I would have never thought of or that showed just how genius the concept of the book actually was. I'm not sure why I expected that.

What I got instead was a bloodbath. I suppose that's fine with some people, and maybe even embraced by others, but I'm having a bit of a problem with it. To add to my frustration, when I finished the book I turned on the TV. I flipped to a kid's channel that was showing Kung Fu Panda which I'd seen before, but it had been a while. For the 15 minutes or so that I watched, I witnessed a fight scene that just went on and on. The part that bothered me was the fun, comical score that was playing in the background while these characters beat the shit out of each other.

Yes, I understand it was Kung Fu Panda and what did I expect? When I saw it the first time around, apparently the fighting didn't leave an impression on me because I didn't remember seeing any of it before. But this time I had just read a book that, from pretty much cover to cover, found new and inventive ways to kill tons of other human beings.

This time I saw the scene with new eyes and I couldn't help but wonder how we got to this place. Is violence the only way we know how to solve problems now? I'm afraid it is, at least in our entertainment. Video games, movies and books aimed at the part of the population who will some day lead a country that I will still be living in. That's where the creative thinking of the future will plant its roots.

And I don't think there's anything any of us can do to stop it.
Posted by Unknown at 8:11 PM No comments: 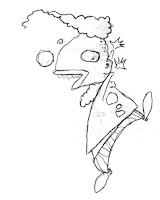 I just ran across a couple drafts for blog posts this morning, and realized they've been sitting around for over a year waiting to be posted. They each included a sketch of a clown without any other explanation. The first sketch hasn't gone anywhere. I wasn't very satisfied with it for some reason. I had planned on making a painting out of it, but it never materialized.

Once I wasn't satisfied with the first sketch, I tried another clown, and this one I ended up completing as a full-blown drawing, and he's hanging in an exhibit as we speak. 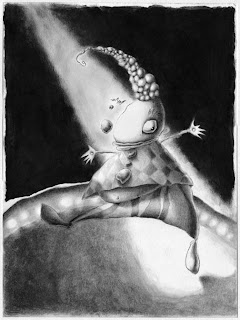 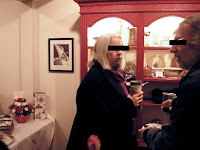 And here's the exhibit.
Posted by Unknown at 11:10 AM No comments:

Ooh. I do have one more page to show you from my Sketchbook Project sketchbook, and here it is. It's what you might consider the end papers. 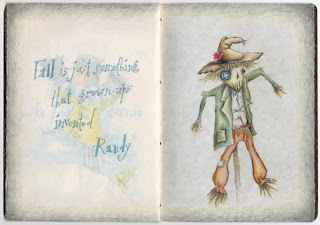 And here's the last drawing my Sketchbook Project sketchbook.

The quote is the title of the song by The Hives (who happen to have a really cool website, by the way). I loved the song when I heard it on the Cartoon Network (see the embedded video), but it was really hard to find a copy at first since it was a bonus track only on the UK version of their Black and White album. Eventually iTunes caught on that I was looking for it, and finally made it available for me. Thanks, iTunes.

Posted by Unknown at 3:04 PM No comments: