So I've been contemplating lately what my next move will be regarding my illustration career. As I blogged earlier, I don't think the direction I was heading was quite the right direction I should be. It's kind of hard to keep doing what you're doing when what you're doing isn't doing anything. Isn't that the definition of madness? Spinning your wheels and expecting a different result?

My mailing list since 2005 has been directed toward picture book publishers, and there aren't too many No, Davids or Frog Belly Rat Bones out there. And you know what? That's fine. I'm not sure I'm understanding the logic, but I respect the decision, and I'm free to move on.

This morning I bought a Kindle copy of the 2011 Artist's and Graphic Designer's Market book. It's been a while since I had a copy (looks like 2007 was the last), and I wanted to get a version that didn't leave me with a dead tree in a few years. So I'm Kindle-ing this one.

I've decided my mailing list is getting a do-over, and I'm starting with the Market book I bought this morning. When the 2012 Children's Writer's and Illustrator's Market book comes out in September, I'll sift through that one, too. I'm going to look for publishers for older kids this time, and book covers and maybe posters and agents and such.

I still love, love, love picture books, but I've resigned myself into accepting that if I ever get one published it will likely be independent of a major house. And I'm fine with that, too. I'll be doing it because I love creating and pulling ideas out of my butt, and that satisfaction can happen no matter who pays for the final outcome. 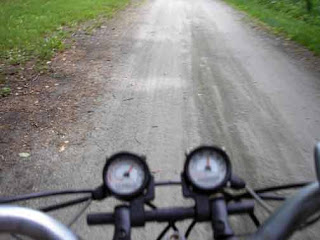 Yesterday I went for a bike ride (Rockwood, PA to Garrett, PA on the Great Allegheny Passage). I took a picture while I was riding, so I have an excuse for the blurry. Lots of thoughts in my head, including the one I shared above.

And here's another one:


You need to get out more.
You need to move more.
The more you move more,
the more oxygen gets sucked into your little brain,
and the more thoughts can get thought out of your butt.

Think your own thoughts. Paint your own pictures. Live your own life.
Posted by Unknown at 8:35 PM 2 comments: